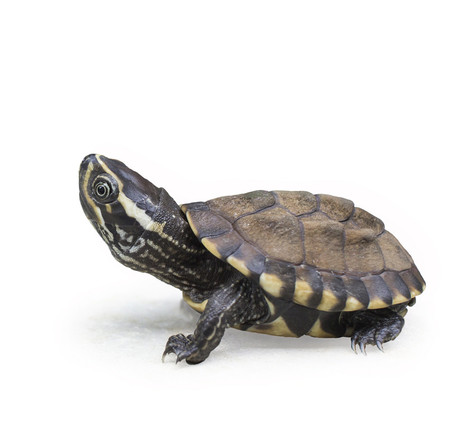 The Baby Eastern Musk Turtles for sale are small, interesting creatures with unique traits. Also known as Common Musk Turtles, or Stinkpots, they get their name from their unusual defense mechanism. When startled or frightened, these little turtles release a foul odor that repels potential predators. Luckily, this only happens when the turtle senses danger. If an eastern musk turtle is used to being around or handled by humans, the lack of fear means a distinct lack of stink.

Their small size and the fact that they prefer shallow water, make eastern musk turtles easier to care for than many other turtle species. They’re also unique and interesting in other ways. Unlike most aquatic turtles, eastern musk turtles aren’t very good swimmers. In fact, they prefer walking along the bottom of shallow water. However, they aren’t very good at walking on land, but they are pretty amazing climbers. They are often found climbing branches, logs, bushes, and trees near the water, sometimes climbing as high as six feet up! Boaters and fishermen have even reported having these eastern musk turtles falling from tree branches into their boats.

In the wild, common musk turtle populations tend to be made up of mostly adults, as the eggs and hatchlings are very vulnerable to predators. Luckily, these eastern musk turtle hatchlings were bred and hatched in captivity, removing the threat of predators altogether. The baby eastern musk turtles for sale here were hatched this year and measure less than an inch. Though they’ve got a lot of growing to do, they still won’t get very big. Most adults grow to reach about 3 inches for males and 4-5 inches for females. For many species in the animal kingdoms, a small body tends to mean a short life. But musk turtles are an exception to that rule, with most living over 30 years. They have even been known to live 50 to 60 years in captivity.

Eastern musk turtles have smooth, oval shaped carapaces, or upper shells that are dome shaped and dark brown or black in color. This dome starts high in young turtles and flattens out over time. Their plastrons, or lower shells, are surprisingly small, and leave more skin exposed than most turtle shells. They make up for this with the ability to partially close their shells in the front, protecting their long necks and triangle shaped heads from predators. Though sometimes confused with common mud turtles, eastern musk turtles have a few distinguishing features. They have two yellow stripes on the sides of their heads and soft barb-like projections, or barbels, sticking out from their chin and throat. Their feet have distinct webs and claws, which can account for some of their awkward clumsiness on land.

Eastern musk turtles are often found in and around ponds and lakes, though they tend to hang out in the shallow areas, foraging in the substrate for food. Though their skin is too thick to absorb oxygen from the water like some turtles, they can still stay underwater for great lengths of time, thanks to a neat little trick of nature. Musk turtles are some of the only turtles (or animals for that matter) that can breathe underwater using their tongues. Their tongues are covered in tiny buds called papillae that allow them to breathe underwater. Because of this, they tend to do nearly everything under water, including eating, basking, hibernating, and mating. The only thing they absolutely have to leave the water for is to lay their eggs. Of course, some do prefer to bask above water on floating tank accessories or a raised bed of rocks and substrate.

While their habit of releasing an odorous liquid to ward off predators might make them seem unappealing at first, it’s actually a very rare occurrence, especially in turtles raised in captivity. Since they know that humans won’t hurt them, they have little reason to react defensively. They’re still a bit shy, especially during the day, but can be very active and social at night. They do well in small groups when paired with other musk or mud turtles, as they enjoy basking, foraging, and hibernating in groups. Their small size makes it easy to keep multiple turtles together in a single enclosure, though it’s a good idea to avoid placing two males together. They prefer enclosures with plenty of room to walk, both in and out of the water, shallow water levels, and accessories to bask or climb on.

Every baby eastern musk turtle for sale here is healthy and active, given the best care by professional herp experts, and fed premium aquatic baby turtle food for optimal health. At My Turtle Store, we have the largest selection of captive bred turtles and tortoises, as well as anything you might need to keep your turtle comfortable, healthy, and safe. We ship anywhere in the US using UPS 2 Day shipping or Next Day Air, and all of our turtles come with a free 10-day health guarantee. We also match any competitor’s prices on turtles and shipping. Have a question? You can call us toll-free to talk to a qualified herp expert Monday thru Friday from 8 am to 5 pm EST at 800-277-9286. If you’re ready to buy one of the baby eastern musk turtles for sale here, just use the easy checkout options above, and don’t forget to include a cool pack to keep your turtle comfortable and add some of our premium baby turtle food to your order.